Dinosaurland in Vernal, Utah is known for its immense amount of dinosaur fossils and bones to be discovered in the area. New and exciting dinosaur discoveries are still happening in Dinosaurland. During the summer of 2019 paleontologists found a Stegosaurus femur, three intact teeth, and prepared countless fossils with a valid permit from Dinosaur National Monument. 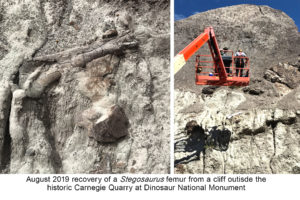 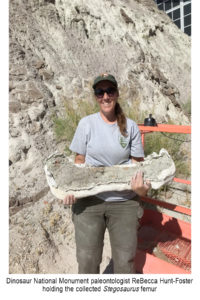 Stegosaurus femur was collected in Dinosaur National Monument on August 8, 2019. New Dinosaur National Monument paleontologist ReBecca Hunt-Foster was alerted to the presence of the femur by maintenance employee Bobby Cunningham in the spring of 2019. The fossil had become significantly exposed and was at a high risk of falling off of the cliff outside of the historic Carnegie Quarry. Cunningham took Hunt-Foster the 30 feet up the cliff to inspect the fossil from an aerial work platform. It was determined that the specimen should be removed to avoid an additional damage to the specimen from erosion and gravity. After completing the necessary paperwork, the specimen was excavated and a field jacket made of plaster bandages was applied to help safely remove the specimen from the wall. The specimen will now be transported to the Utah Field House of Natural History State Park Museum to be cleaned and prepared for use by researchers and possibly put on exhibit. This was the first time a fossil had been removed from outside the Carnegie Quarry since the mid-1990’s, according to monument staff.

In May 2019, Dale Gray a paleontologist volunteer with Dinosaur National Monument & President of Utah Friends of Paleontology was working hard at cleaning a previously collected fossil at the Utah Field House of Natural History State Park Museum fossil preparatory lab in Vernal when he found something exciting beneath a rib bone that was laying across the vertebrae on an Apatosaurus dinosaur.

The story starts 34 years earlier in 1985 when Gray answered a newspaper article from the Dinosaur National Monument asking for volunteers. Gray was taught the basic paleontology tasks and procedures before helping to uncover a vertebrae of an Apatosaurus. The dig took several years to complete and the vertebrae was removed slowly in separate sections.

Eventually all of the vertebrae had been cleaned and prepared except for one. In 2005, Gray was assisting on cleaning some of the fossils from the 1985 dig when he realized that the there was a missing section that had never been completed. The last section had been pushed to the back of a storage unit at Dinosaur National Monument with newer fossil digs being placed in front of it and blocking the label. All of the searches for the missing jacket had been unsuccessful until several years later when the preparatory lab at the Utah Field House of Natural History State Park Museum received several fossil jackets delivered from the Monument to clean.  Gray knew instantly that one of the jackets was different from the other jackets and that it was from his first volunteer project in 1985. 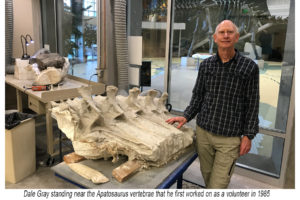 Gray decided that the first jacket to be cleaned would be the missing final section from the 1985 dig.  Gray began cleaning the fossil slowly and methodically. As he cleaned he noticed that there was a rib bone laying across the vertebrae and underneath something that looked different from the rest of the fossil. Grays knew there was no way to determine what the different looking material was until the rib bone was removed. His priority shifted to cleaning the rib bone so that he could remove it successfully from the vertebrae. Once the rib bone was removed Gray was excited to find three intact teeth resting underneath were the rib bone had been previously.

The three teeth discovered are from predatory dinosaurs found during the late Jurassic time period. The large tooth is from a Ceratosaurus and the two small teeth were from a more common Allosaurus. It is possible that the Ceratosaurus and Allosaurus were scavenging from the deceased Apatosaurus when they lost their teeth. There are no bite marks on the bones to indicate that a struggled had occurred. The fossils may also have been transported by water, coming to rest against the body of the Apatosaurus, and fossilized at the same time. 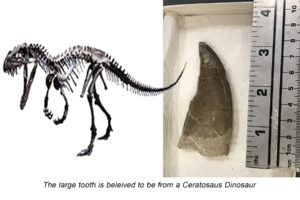 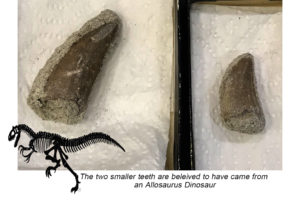 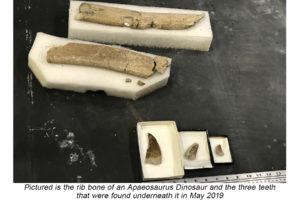 As a word of caution, we know that hearing about new dinosaur discovers is exciting but please remember to follow all rules and to not collect vertebrate fossils, like dinosaurs, on your own. Collecting vertebrate fossils from public lands (National Park Service, Bureau of Land Management, National Forest) is illegal. All of the fossils mentioned in this story were collected with proper valid permits. If you believe you have knowledge of a fossil location please notify the proper personnel at the Dinosaur National Monument, Utah Field House of Natural History State Park, or the Bureau of Land Management and who will reach out to paleontologist who can properly collect the fossil. 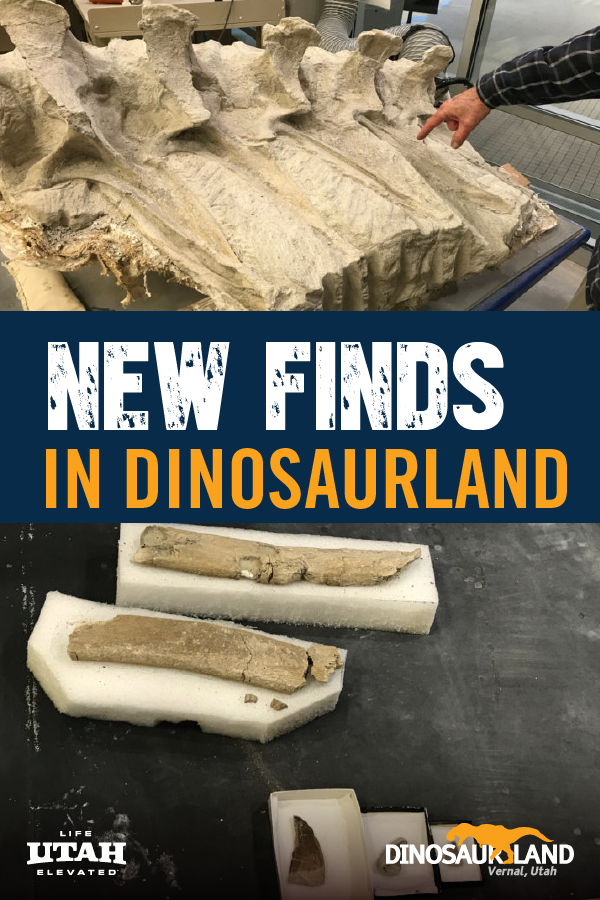 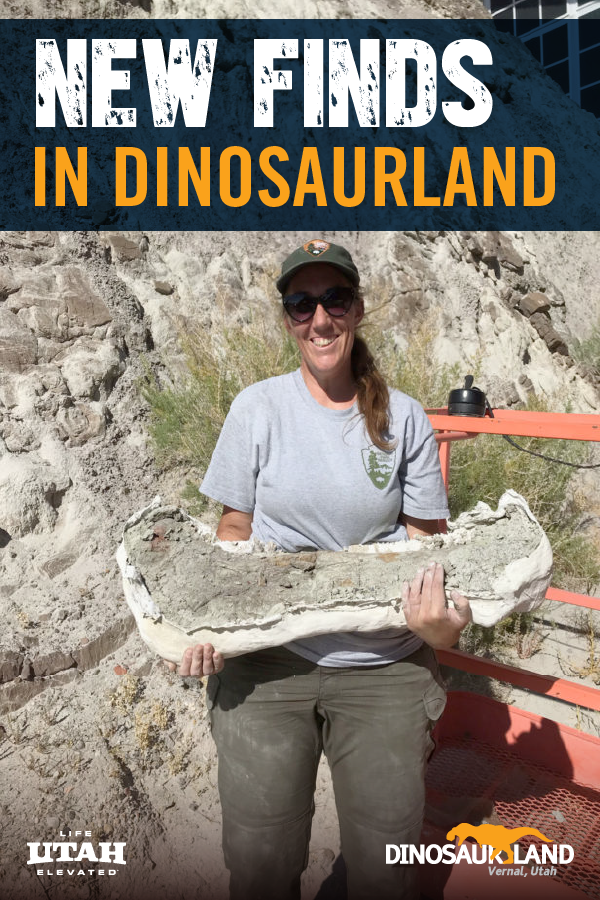 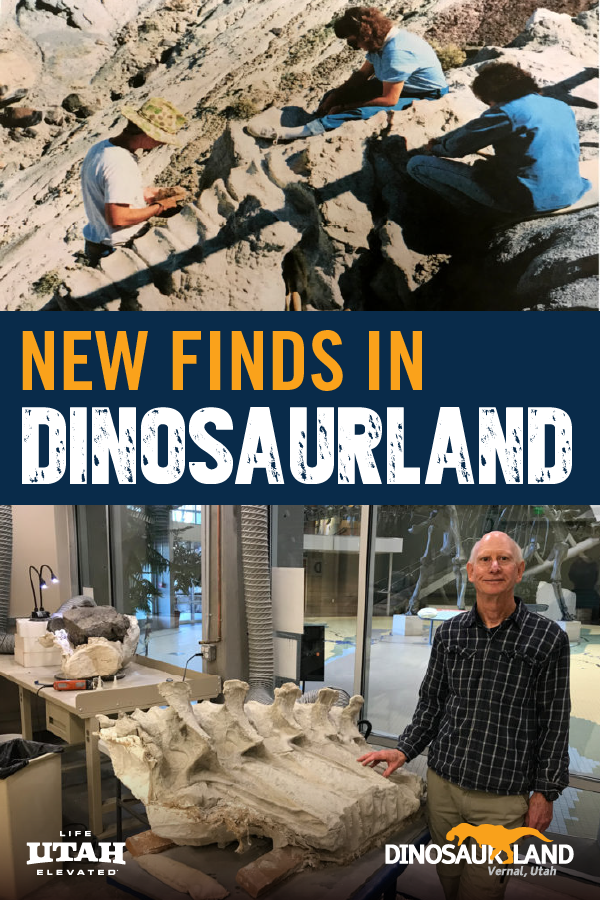